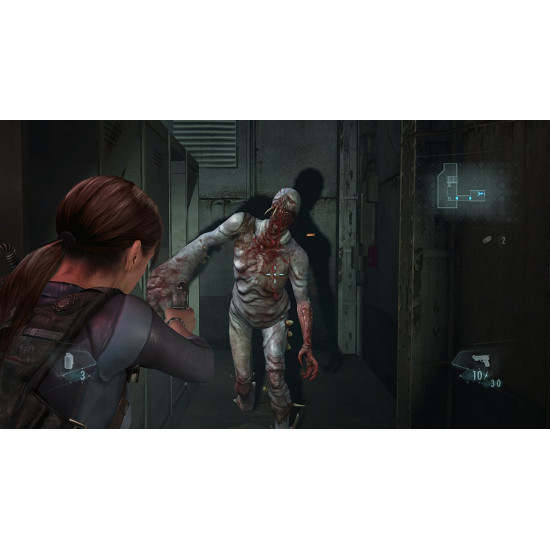 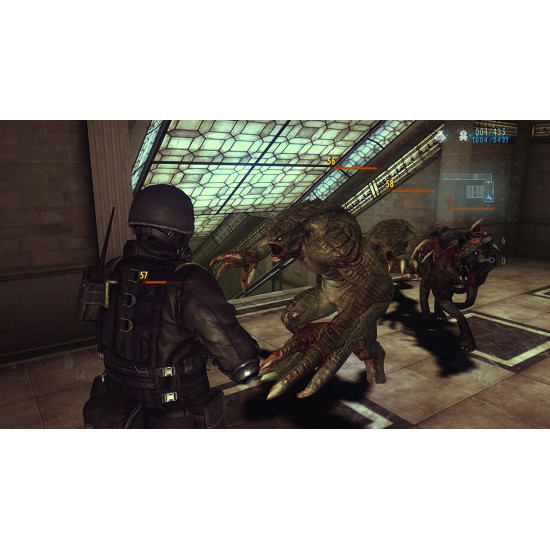 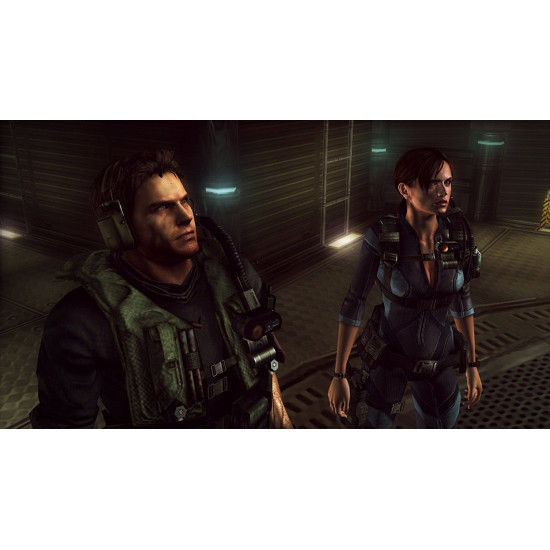 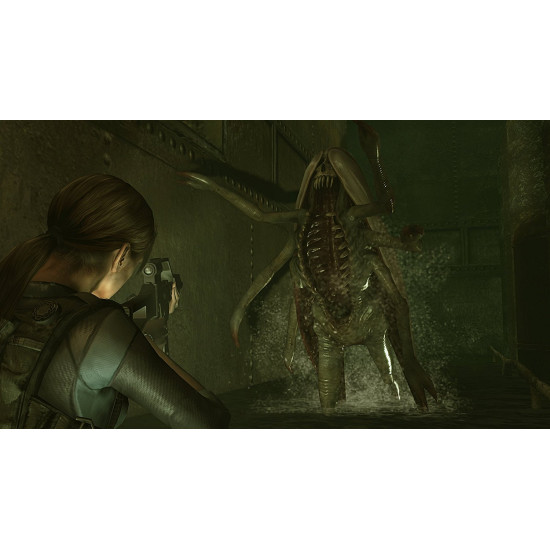 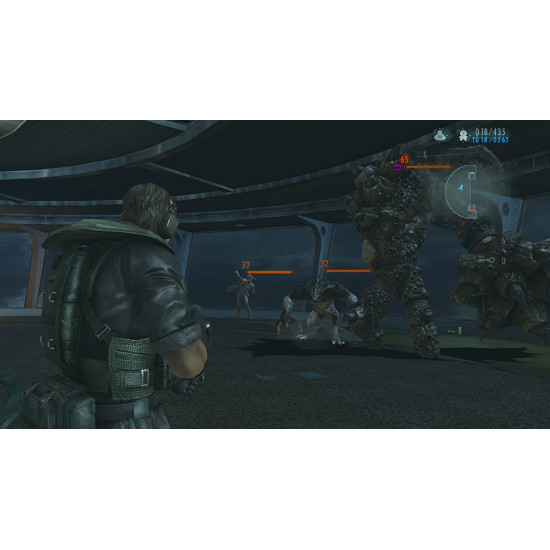 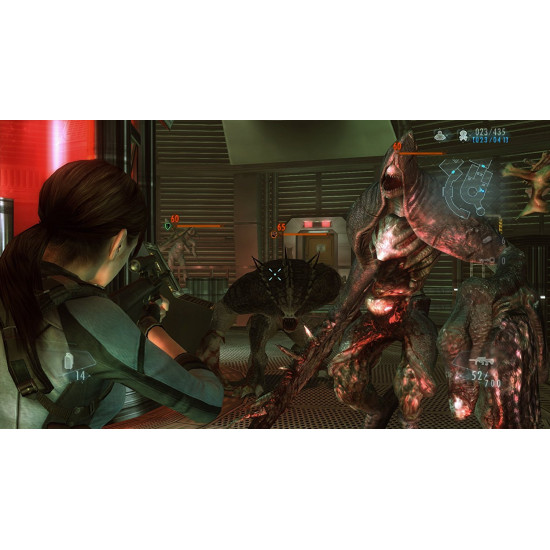 The game is set between Resident Evil 4 and Resident Evil 5. It depicts the events shortly after the establishment of the Bioterrorism Security Assessment Alliance (BSAA), a counter-terrorism group introduced in Resident Evil 5. The story revolves around BSAA co-founders Jill Valentine and Chris Redfield, the protagonists of the first Resident Evil. During the game's events, Jill and Parker Luciani are sent to search for Chris Redfield and Jessica Sherawat on the SS Queen Zenobia, that serves as the game's setting. The game's story includes a flashback, which revolves around the "floating city" of Terragrigia (Italian for "Grey Earth") one year prior to the game's events, when the Federal Bioterrorism Commission (FBC) sent agents – including Parker and Jessica – to keep the situation under control after the bioterrorist organization "Il Veltro" launched an attack on the city using bio-organic weapons (BOW) in opposition to Terragrigia's solar energy development.

In 2005, BSAA head Clive R. O'Brian sends out Jill Valentine and her new partner, Parker Luciani, to search for Chris Redfield and his new partner, Jessica Sherawat. They have reportedly gone missing and lost contact with HQ during their mission to investigate Veltro's possible reappearance. Jill and Parker are sent to search for them at their last known location, the cruise ship SS Queen Zenobia. During their search, they encounter several B.O.W.s on the ship infected with the T-Abyss virus, a marine virus derived from the deadly T-Virus. They finally enter a room where they believe Chris is being held, realizing too late that it was all a trap. Chris and Jessica, meanwhile, find a base of operations for Veltro; the Valkoinen Mökki airstrip in the mountains. Being informed by O'Brian that Jill and Parker are missing in the Mediterranean, they are redeployed to investigate their whereabouts. Awakening in separate locked rooms aboard the Zenobia, Jill and Parker manage to escape and regroup. They later encounter FBC agent Raymond Vester, whose life Parker had saved during the Terragrigia Panic. They also witness a video transmission of a masked man claiming to be part of Veltro who threatens to infect approximately one fifth of the Earth's oceans with the T-Abyss, which was created in retaliation to the FBC for their involvement in the destruction of Veltro's forces on Terragrigia.

Chris requests that a team be sent to Valkoinen Mökki to find information on the ship, prompting O'Brian to order BSAA agents Quint Cetcham and Keith Lumley to investigate. Jill and Parker reach the ship's antenna to contact HQ, requesting evacuation, but are cut short by O'Brian receiving a call from the European Security Force, informing him that the Regia Solis has been activated and is targeting the ship. Meanwhile, Quint and Keith discover that O'Brian had orchestrated Veltro's re-emergence along with other crucial information. However, they lose contact with O'Brian when an airstrike decimates Valkoinen Mökki. Chris and Jessica arrive to the Queen Zenobia. At the same time, Jill and Parker are confronted by the Veltro operative, who poses various questions hinting at a larger conspiracy. However, before he can reveal anymore, Jessica shoots him. Parker unmasks him to discover it was Raymond. He seemingly dies after whispering something to him. Afterwards, Chris and Jill make their way to the ship's laboratory to stop the virus from contaminating the sea, while Parker and Jessica search for a way to stop the ship from sinking. During the search, Parker turns his gun on Jessica, suspecting her of being an FBC mole, as told by Vester. At the same time, Raymond reveals himself to be alive, having worn a Kevlar vest, and working with O'Brian. Jessica wounds Parker and initiates the self-destruct sequence, confirming her to be the mole. Having found the laboratory, Chris and Jill are confronted by Lansdale, via video uplink, revealing that he worked with Veltro in the Terragrigia Panic in an effort to increase the FBC's funding and international influence; notes left by former crew members reveal that he had dispatched a research team to create a vaccine, and then killed them off by releasing the ship's monsters after they'd sent it to him. Despite the Queen Zenobia self-destructing, they manage to neutralize the virus. Pilot Kirk Mathison contacts Chris and Jill informing them that he is there to extract them. They then meet with an injured Parker but despite the pair's attempt at saving him, Parker falls into the fire below a broken catwalk.

O'Brian informs Chris and Jill about the truth behind the mission: he had orchestrated the events in an effort to gather evidence of Lansdale's involvement in Terragrigia. He then informs them of the results from Keith and Quint's data analysis: the existence of a third sister ship known as the Queen Dido below the ruins of Terragrigia, which was destroyed by Lansdale to eliminate incriminating evidence of his involvement. However, Lansdale then proceeds to arrest O'Brian, cutting off communications. Jill and Chris search for Jack Norman, the leader of Veltro, knowing that he holds evidence against Lansdale. However, he has gone delusional, and survived a year by injecting himself with T-Abyss and resisting mutation through his own desire for vengeance; he then injects himself with an overdose of the virus, believing Chris and Jill to be FBC sent to kill him, and transforms into a new type of Tyrant known as the "Final Form Abyss". After a long battle, he is finally killed, expressing his relief that he could finally be at peace. Chris and Jill then broadcast the video via Norman's PDA, exposing Lansdale. O'Brian is immediately released and arrests Lansdale. The truth behind Terragrigia went public and the FBC was dissolved. Parker, who was saved by Raymond from the explosion, was found adrift off the shore of Malta and, after a month of recovery, resumed his position as a Special Operations Agent for the BSAA; while O'Brian decides to take responsibility for his actions in orchestrating the entire mission and steps down as director of the BSAA. Quint and Keith are revealed to have survived the air raid. The game then shows Chris and Jill walking up to the Spencer estate from the "Lost In Nightmares" episode of Resident Evil 5. In a post-credits scene, Raymond approaches Jessica at a cafe and gives her a sample of T-Abyss. She asks him why he saved Parker, with him replying that he "had his reasons", whilst removing his sunglasses.