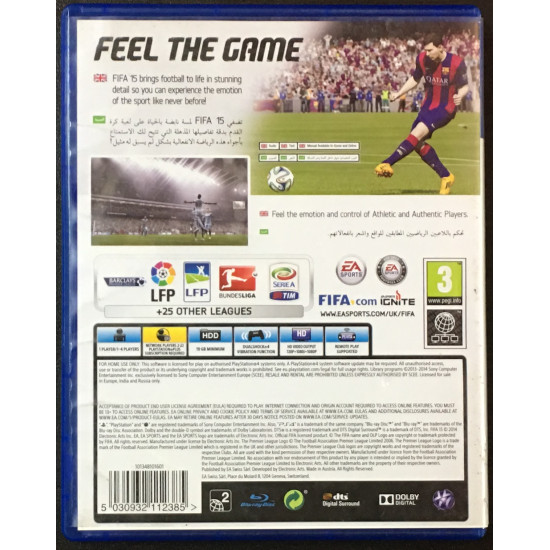 Quickview
3 Months UK PlayStation Plus Membership - PS3/ PS4/ PS Vita - Digital Code
390.00LE 470.00LE
Add to Cart Add to Wish List Compare this Product
This product qualifies for free shipping when bundle it.
This product qualify for free shipping inside Cairo and most of States; when buy it with another product and your order value exceed 1500 EGP.
FIFA 15 - Arabic Edition - Used Like New | PS4

FIFA 15 brings football to life in stunning detail so fans can experience the emotion of the sport like never before. Witness the intensity of crowds chanting and cheering like on match day, and listen to commentators guide fans through the story of the game with Dynamic Match Presentation. For the first time ever, all 22 players on the pitch are connected with Emotional Intelligence – now players will react to opponents and teammates within the context, and relative to the narrative of the match.  Next Generation Visuals put fans on Living Pitches with grass that wears and tears as the match progresses. Authentic Player Visuals make players lean, athletic, and true to their real-life appearance. Player Control heightens the responsiveness of player movement, gives athletes more control and personality on the ball, and makes Man-to-Man Battles more rewarding than ever before.  Football is the greatest drama on earth and FIFA 15 puts fans center stage, allowing them to feel the emotion and intensity of the world’s greatest sport. Additional features and game mode details will be revealed in the months leading to the game’s release this September. Game Pillars & Features Emotion & Intensity   Unrivalled Intelligence   Player Control

Terms and Conditions: This offer is being issued to you for promotional purposes only and does not constitute a credit, charge, debit or gift card. Offer expires September 26, 2014 and is good only for new purchases of FIFA 15 (“product”) for the PlayStation 3, PlayStation 4, Xbox One, Xbox 360 and PC consoles. Code included with purchase good for 1 Gold Pack entitlement each week for use in FIFA Ultimate Team game mode (“Ultimate Team”) for a total of 15 consecutive weeks. Code must be redeemed by October 6, 2014 to receive all 15 Gold Packs. Late code redemption will result in forfeiture of previous weeks’ Gold Pack entitlement. Code to redeem gold packs codes expires January 26, 2015. Each Gold Pack weekly offer is valid for 7 days and must be redeemed within that time period. Failure to download and/or use the Gold Pack in any given week will result in forfeiture of that week’s Gold Pack offering. Each gold pack contains 12 Ultimate Team items, most are gold items and 1 rare item. Additional codes to redeem EA Sports football club catalogue items expire September 26, 2015. Valid only wherever product is sold. Offer may not be substituted, exchanged, sold or redeemed for cash or other goods or services. May not be combined with any other offer, gift card, and rebate or discount coupon. Void where prohibited, taxed or restricted by law. See final product details, EULA and content protection technology at www.ea.com/1/product-eulas if and when available. Internet connection, origin account, registration with serial code and acceptance of end user license agreement may be required to play. EA only privacy and cookie policy and terms of service can be found at www.ea.com. You must be 13+ to access online features. EA may discontinue online features after 30 days’ notice at www.ea.com/1/service-updates.